The Temptations : Ball Of Confusion 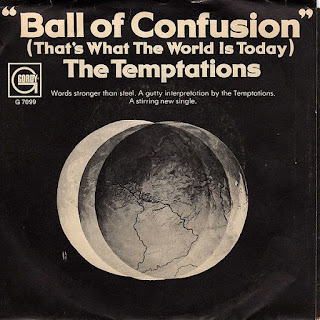 
PERFORMED BY The Temptations

"Segregation, determination, demonstration, Integration, aggravation, Humiliation, obligation to our nation
Ball of Confusion That's what the world is today"
It’s been awhile since I have done a post for this site. I want to thank K for not kicking me off and I promise to do better in the future.

America is a pretty confusing place right now. It’s 2010 and we have all kinds of issues. The worst part about it is that the real issues seem to be taking a back seat to all the emotional things that district everybody. We are having racial debates and discussions about religious freedom. Saturday a pastor is supposed to burn a holy book from another religion and we just so happen to have thousands of troops in countries that practice the religion in question. There are talk show hosts telling Americans that they are losing their freedom more and more every day although I haven’t seen anyone doing anything differently than they were before. They shout mean things about the president at the top of their lungs. He doesn’t seem to want to acknowledge it all that much but he adjusts his policies to validate the stuff that they say.

Meanwhile, the economy is a mess and no one appears to have any idea what they are doing or wants to pay the price for doing what’s necessary. Nowadays I find myself watching the news with a puzzled look on my face. I keep trying to figure out if what I am seeing is just a product of growing pains from a nation that elected a man of color as its leader for the first time. I’m sure that’s some of it but we elected him so we should be more advanced to the point where it wouldn’t be okay to let that keep the entire country’s progress in limbo. Everyone has a take on it but I don’t think anyone really knows for sure.

Ball of Confusion was released in 1970 by the Temptations for the Gordy- Motown label. It was written by Norman Whitfield and Barrett Strong. It was released as a single and appeared on the Temptations Greatest Hits Volume 2. That shows you how music has changed that in 1970 the Temptations were on their second volume of greatest hits already. This song was from the Dennis Edwards era of the group after David Ruffin left. This was the period when they were touching on social issues. This era was proof you could be conscious and make good music that sells. I think a lot of that is missing in today’s rhythm and blues music as well as the audience. Besides the fact that I love the group, I think 80% of the lyrics to this song symbolize what we are going through 40 years after it was written. There’s a line in the song that says “Politicians think taxes will solve everything”. You couldn’t get more than a handful of politicians to admit that this year. I am not sure if we should look at this song as being so well written that it has been able to stand the test of time or we should be more depressed that we live in an environment today that still makes this song so relevant. We might have a long way to go but at least we have good music to listen to while we sort everything out. I added an a capella clip just to show that real singers don’t need studio tricks to sound good.

People movin' out
People movin' in
Why, because of the color of their skin
Run, run, run, but you sho' can't hide
An eye for an eye
A tooth for a tooth
Vote for me, and I'll set you free
Rap on brother, rap on
Well, the only person talkin'
'Bout love thy brother is the preacher
And it seems,
Nobody is interested in learnin'
But the teacher
Segregation, determination, demonstration,
Integration, aggravation,
Humiliation, obligation to our nation
Ball of Confusion
That's what the world is today

The sale of pills are at an all time high
Young folks walk around with
Their heads in the sky
Cities aflame in the summer time
And, the beat goes on

Air pollution, revolution, gun control,
Sound of soul
Shootin' rockets to the moon
Kids growin' up too soon
Politicians say more taxes will
Solve everything
And the band played on
So round 'n' round 'n' round we go
Where the world's headed, nobody knows
Just a Ball of Confusion
Oh yea, that's what the world is today

Fear in the air, tension everywhere
Unemployment rising fast,
The Beatles' new record's a gas
And the only safe place to live is
On an indian reservation
And the band played on
Eve of destruction, tax deduction
City inspectors, bill collectors
Mod clothes in demand,
Population out of hand
Suicide, too many bills, hippies movin'
To the hills
People all over the world, are shoutin'
End the war
And the band played on