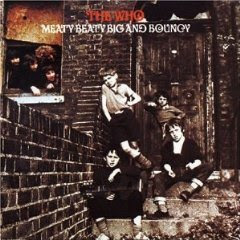 PERFORMED BY The Who

NOTE "Substitute" is an essential Who song. No Who anthology is complete without it.


"Substitute," The Who's sardonic look at a relationship plagued by inflated expectations, stands as one of their finest early songs. For years the traditional concert opener (until supplanted by "I Can't Explain"), "Substitute" remains in their repertoire today and rarely fails to get a crowd on its feet. I saw them perform a brilliant rendition of it as recently as 2002, shortly after John Entwhistle's death. Roger Daltry blustered and bawled out the words while Pete Townshend prowled the stage, windmilled with abandon, and sang harmony as well as ever. (He must have been feeling especially on that night, as he even smashed his guitar at the end of the show.)

The first two words of the song -- "You think" -- signal that that the singer has a different notion of the the way things are than the person he sings to, even though "we look pretty good together." To begin with, he's shorter than she is ("I look pretty tall but my heels are high"). Moreover, he resents the way she has imposed a fantasy ("The simple things you see are all complicated") on a man who is not only short, he's older ("I'm just backdated") and wears a cheap suit ("My fine looking suit is really made out sack"). In other words, he can't possibly live up to the image she has of him.

Born on the wrong side of the tracks ("he north side of my town faced east and the east was facing south") and in modest circumstances (" a plastic spoon in my mouth"), it is perhaps these humble beginnings that give him the power to see things as they are ("I can see right through your plastic mac"). The problem is that whenever he tries to be open about himself, the "crocodile tears" flow because she's happier substituting "lies for fact." Although they have a "genuine problem," she prefers to "just pass it by": Paradoxically, she puts the relationship at risk by refusing to take a risk and admit to the problem.

Anyone who has been in a relationship in which the other person expects them conform to an ideal rather than be themselves can identify with "Substitute." The person held up as an ideal, ironically, gets little out of the relationship because whatever is given is given to someone who doesn't exist. Hence the sarcastic final verse, in which the singer confides that he'd rather be with his mother:

Pete Townshend would write many more songs exploring the natures of perception, fantasy, and reality, especially as they had to do with rock stardom and fans. In this context, one might view the two lovers in "Substitute" as stand-ins for a rock star and a fan, with the fan mistaking the trappings of stardom for reality. Townshend, a fan himself as well as a star, ultimately held The Who's supporters with great affection even as he warned them of the personal dangers of attaching too much credence to the pronouncements rock stars. He would rarely write of this with more wit or greater insight than in "Substitute."

But I'm a substitute for another guy
I look pretty tall but my heels are high
The simple things you see are all complicated
I look pretty young, but I'm just backdated, yeah

Substitute your lies for fact
I can see right through your plastic mac
I look all white, but my dad was black
My fine looking suit is really made out of sack


1967, at the Monterey Pop Festival. What a difference a year makes.


1970, at Leeds. Daltry's curls and fringes and Pete's jump suit appear and The Who become rock icons.


1974. The harmony vocals are especially strong:

Labels: Substitute, The Who