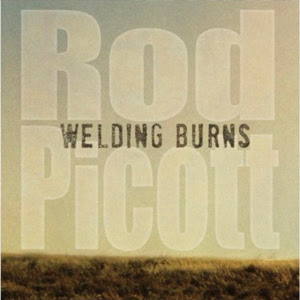 About a year ago I'm sitting in Ashland Coffee & Tea in Ashland, Virginia waiting for Mary Gauthier to come on when I hear this song on the sound system. You how it is -- you're reading a book or something and all of a sudden this singer you've never heard makes you jerk your head up and look around all herky-jerky like you've just emerged from a pitch-black room into the bright light. There's a guy singing about his .410 shotgun with the stock and barrel cut down and I'm rapt even though I don't own a gun. I find out that the song is called "410," and that it's from the album Welding Burns by a songwriter named Rod Picott.

I catch Rod's act a couple of months later. He makes ends meet by hanging sheet rock (he's got a good song about that, too), and he wrote 410 because he found himself wondering what he would do if he didn't know how to hang sheet rock.

Throughout 410, Picott combines empathy, satire, and laconic irony: Advised to think "outside the box," the jobless protagonist heads down to the local K-Mart and buys a Mossberg shotgun and a roll of duct tape. The Mossberg may not be the finest weapon -- eventually he'll want to "trade up" -- but for a newly self-employed guy just starting out, it will do.

As the song progresses, the protagonist romanticizes his desperation, never robbing more than he needs and grabbing a 12-pack "for the ride down the state highway." But always, Picott returns to the chorus, which morphs from bitter to menacing as the true nature of the "laid off" man's plight sinks in. Deep down, he knows that in the end, the shotgun leads nowhere:

Enough to get you into trouble

It ain’t enough to get you out

To Picott, the gunman is a victim too, a man discarded by globalization who deep down wants nothing more than his old job at the tire plant. Instead, he has become alienated, with trust only in his .410 and hope only in his Firebird, his dreams reduced to trading up to a better weapon.