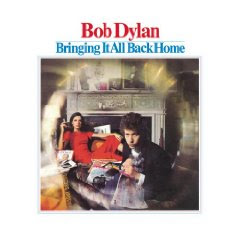 SONG Love Minus Zero/No Limit
WRITTEN BY Bob Dylan
PERFORMED BY Bob Dylan
APPEARS ON Bringing It All Back Home (1965); At Budokan (1979); The Concert For Bangla Desh (2005, DVD only)

I've been pondering the meaning of this song for more than thirty years. LMZ/NL is one of my favorite Dylan songs (and therefore one of my favorite songs), although a precise interpretation has long eluded me. But, writing about a song uncovers meaning. Even the act of copying lyrics has an effect: I grasp much more from typing them instead of cutting and pasting.

For example, the meaning of this aphorism closing the second verse--

--perplexed me. Was Dylan being deliberately enigmatic, laughing up his sleeve as fans sought a profundity where none existed? Then I wrote it down and Dylan's point suddenly became clear: Since we learn more from our failures, they are more important than our successes ("there's no success like failure"). Thus, failure is nothing like success ("no success at all"). Dylan sets up the lyric nicely with an account of banal conversations and speculations irrelevant to what actually happens.

Dylan often deals in punch lines. LMZ/NL typifies this propensity, where the imagery of each verse sets up a clearly stated conclusion. Thus in the first verse, love's elemental nature renders mere store-bought valentines as an inadequate expression. In the surreal third verse, iconic figures ("madams," "horsemen," "pawns," and crumbling "statues") intermingle and destroy each other while love watches bemused ("My love winks"), not judging because it's all small stuff anyway.
In the climactic fourth verse, the banker's nieces' ideal of "perfection" (the "gifts of wise men") echoes the Nativity story. Compared to love, though, religion is a relatively earthly matter subject to corruption (hence the financial imagery). Love in all its forms -- romantic, platonic, brotherly -- is Dylan's higher power. We can see this by the way he invokes love's strength in the face of everything from the quotidian ("dime stores and bus stations") to the mystical ("ceremonies of the horsemen").
All which leads to the doozy of the finale:

The wind howls like a hammer,
The night blows cold and rainy,
My love she's like some raven,
At my window with a broken wing.

The power of love notwithstanding, human indifference can break it. The elements suddenly turn dangerous, reducing love to a futile exercise of battering at the window separating it from an unresponsive lover. And so, love can in the end fall victim to the banalities of human nature. Which is why we must strive to be "true, like ice, like fire" lest we lose love's great capacity to heal, bind, and reveal.

LYRICS
My love she speaks like silence,
Without ideals or violence,
She doesn't have to say she's faithful,
Yet she's true, like ice, like fire.
People carry roses,
Make promises by the hour,
My love she laughs like the flowers,
Valentines can't buy her.

In dime stores and bus stations,
People talk of situations,
Read books, repeat quotations,
Draw conclusions on the wall.
Some speak of the future,
My love she speaks softly,
She knows there's no success like failure,
And that failure's no success at all.

The cloak and dagger dangles,
Madams light the candles,
In ceremonies of the horsemen,
Even the pawn must hold a grudge.
Statues made of match sticks,
Crumble into one another,
My love winks, she does not bother,
She knows too much to argue or to judge.
The bridge at midnight trembles,
The country doctor rambles,
Banker's nieces seek perfection,
Expecting all the gifts that wise men bring.
The wind howls like a hammer,
The night blows cold and rainy,
My love she's like some raven,
At my window with a broken wing.

Newport, 1965:
From the Concert for Bangla Desh, with George Harrison, Ringo Starr, and Leon Russell:
A gorgeous version from 1994:
Posted by K. at 4:08 AM