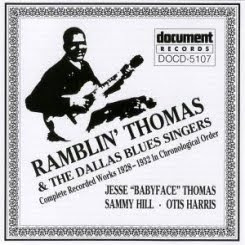 BY: traditional, but this version is particular to Ramblin’ Thomas

There’s a different sense of narrative in much of old-time music, a narrative that’s built on stock phrases & repetition. When we think of the lyrics to old time songs, & particularly old country blues, we’re struck by the preponderance of so-called “floating lyrics”—lyrics that appear in many songs: “the sun will shine in my back door someday”; “the good book it tells you, you’re gonna reap just what you sow”; “my mind was wandering like the wild geese in the west”—a list could go on for several pages. But what does the use of these recurring phrases tell us about blues lyrics?

For me, the “floating lyrics” bring up two points. First, blues is fundamentally improvisational, & this applies to the lyrics as well as to the music. We know that the old blues players were known to extemporize lyrics in the same way the calypsonian singers did. The composition method was essentially oral, not written, & so these recurrent phrases allowed the singer to continue his song in much the way that epic poets would use epithets like “wine-dark sea” or “rosy fingered dawn” in order to continue the narrative flow.

Second, the blues are “universal”—while they are filled with intense personal feeling, there is a sense that the singer is also everyman; the emotional content of these songs is profound because it isn’t circumscribed by individual biography; & the use of these phrases underlines its universal nature.

One such phrase is the simple but poignant “poor boy long ways from home.” In fact, this phrase hasn’t simply recurred in songs, but also in the titles of several distinct blues. The song we’re considering today is “Poor Boy Blues” by Ramblin’ Willard Thomas, but there are also songs called “Poor Boy Long Way From Home” by Barbecue Bob, Bukka White, Gus Cannon, & RL Burnside, among others. The links in the previous sentence will take you to YouTube videos of each song. You can also check out the Bukka White version on my Robert Frost’s Banjo blog right here in today’s post.

I’ve always found Ramblin’ Thomas’ “Poor Boy Blues” to be incredibly moving. It’s a stark song: the slide guitar accompaniment is spare, & the lyrics leave gaps that are filled with questions. Why is the singer in Texas now, & why must he “work or leave,” after he lived as he pleased in Louisiana? Why doesn’t he like land? Other “Poor Boy” songs, such as Gus Cannon’s & Bukka White’s versions, it’s clear that the singer is in prison—in White’s case, on a prison farm. I’m not sure that really fits these lyrics—for instance, the “work or leave” line. Thomas’ “poor boy” seems to be more in the position of an itinerant worker who has to leave home to find his livelihood. But beyond these specific considerations, the song describes a deep homesickness & loneliness, the sense of being “a stranger in a strange land” that many will recognize in their own hearts.

Not much is known about the singer Ramblin’ Thomas. He did record some sides for Paramount in the 1920s, & he was known to be a peripatetic sort, so he came by his nickname honestly, & the fact that he was itinerant no doubt informed the great feeling he brings to this song. You can read more about his biography at the Allmusic site. Here are the lyrics, & you can enjoy the song in the video below!

I was down in Louisiana, doing as I please,
Now I'm in Texas I got to work or leave.

If your home's in Louisiana, what you doing over here?
Say my home ain't in Texas and I sure don't care.

I don't care if the boat don't never land,
I'd like to stay on water as long as any man.

And my boat come a rockin', just like a drunkard man,
And my home's on the water and I sure don't like land.