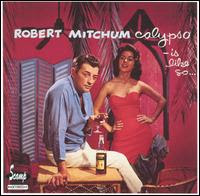 NOTE 1 A poster of the film inspired Bruce Springsteen to write his great song "Thunder Road," which -- besides the title -- is unrelated to the movie. NOTE 2 Raquelle of the blog Out of the Past explains the movie's back story here.

He saw acting as more a profession than an art, and was invariably prepared for every scene he appeared in. Famously unparticular about his roles, Robert Mitchum once said, "I don't care what I play. I'll play Polish gays, women, midgets, anything.'' Jailed for six weeks in 1948 after an arrest for possession of marijuana, he told curious reporters that prison was "like Palm Springs, but without the riff-raff." He modestly ascribed his famed heavy-lidded eyes to chronic insomnia.

The man who romanced Jane Russell three times on screen remained married to his high school sweetheart for 57 years. A repellent villain in Night of the Hunter and Cape Fear, Mitchum played a mild schoolmaster in Ryan's Daughter and a hapless small-time hood in The Friends of Eddie Coyle. The leading man for David Lean and Fred Zinneman also starred in cult classics like His Kind of Woman, Pursued, and Thunder Road, which he produced and co-wrote, not to mention writing and singing the film's theme song, "Ballad of Thunder Road."

The song recaps the narrative of the film, which is the story of a Korean War veteran who makes daring deliveries of moonshine in a souped up '51 Ford. As pressure from revenooers and a rival bootlegger mounts, Mitchum attempts to steer his younger brother clear of the family business while romancing night club singer Keely Smith (who graces the film with a couple of songs; check out the husky voiced chanteuse here). After deciding to lay low for a time, Mitchum finds himself forced to make one last run. With revenooers in hot pursuit, he blasts through a road block and, well, "he left the road at ninety, that's all there is to say..."

"The Ballad of Thunder Road" tells its story without nuance, establishing the small-time stakes of bootlegging by contrasting the hamlets and roads of a hillbilly locale with the exotic big cities of Memphis and Knoxville. Pursued by the law and the lure of death ("the devil got him first"), the "mountain boy" is pressured by his father to make a final run (although the father covers his bets by telling his son to be careful). Despite taking dangerous back roads and shooting gaps at high speed, though, the desperate mountain boy finally cannot outrun the forces of law, family, and the supernatural -- another rebel destroyed by convention.


LYRICS
Now let me tell the story, I can tell it all
About the mountain boy who ran illegal alcohol
His daddy made the whiskey, son, he drove the load
When his engine roared,
They called the highway thunder road.
Sometimes into Ashville, sometimes Memphis town
The revenoors chased him but they couldn't run him down
Each time they thought they had him,
His engine would explode
He'd go by like they were standin' still on Thunder Road.

And there was thunder, thunder over Thunder Road
Thunder was his engine, and white lightning was his load
There was moonshine, moonshine to quench the devil's thirst
The law they swore they'd get him, but the devil got him first.

On the first of April, Nineteen Fifty-Four
A federal man sent word he'd better make his run no more
He said two hundred agents were coverin' the state
Whichever road he tried to take, they'd get him sure as fate.
Son, his daddy told him, make this run your last
Your tank is filled with hundred-proof,
You're all tuned up and gassed
Now, don't take any chances, if you can't get through
I'd rather have you back again than all that mountain dew

Roarin' out of Harlan, revving' up his mill
He shot the gap at Cumberland,
And screamed by Maynordsville
With G-men on his taillights, roadblocks up ahead
The mountain boy took roads that even angels feared to tread.
Blazing' right through Knoxville, out on Kingston Pike
Then right outside of Beardon, there they made the fatal strike
He left the road at ninety, that's all there is to say
The devil got the moonshine and the mountain boy that day