Born Under a Bad Sign - Albert King and others 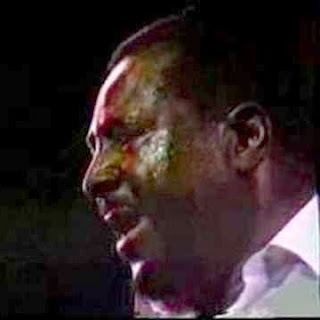 APPEARS ON Albert King, Born Under a Bad Sign (1967); Paul Butterfield Blues Band, The Resurrection of Pigboy Crabshaw (1967); Cream, Wheels of Fire (1968); Jimi Hendrix, recorded with the Band of Gypsies in 1970 but not released until the compilation Blues (1994)

This song reached iconic status from it's first release by Albert King in 1967. As a Blues number it's pretty straightforward; while there's really nothing special about the lyrics (I can think of maybe 10 other Blues tunes with almost the same lyrics right off the top of my head), that driving pentatonic bass line is hypnotic, almost threatening, much like the driving bass loop of Muddy Waters' "Mannish Boy". Still, though, it's fairly straightforward. What's special about this number is its delivery; this song was blessed with performers who took the song and ran with it.

Let's do the lyrics first, and afterward explore what the performers did with it.

Born under a bad sign
I been down since I begin to crawl
If it wasn't for bad luck,
I wouldn't have no luck at all

Hard luck and trouble is my only friend
I been on my own ever since I was ten
Born under a bad sign I been down since I begin to crawl
If it wasn't for bad luck,
I wouldn't have no luck at all

I can't read, haven't learned how to write
My whole life has been one big fight
Born under a bad sign
I been down since I begin to crawl
If it wasn't for bad luck,
I wouldn't have no luck at all

Wine and women is all I crave
A big legged woman is
gonna carry me to my grave
Born under a bad sign
I been down since I begin to crawl
If it wasn't for bad luck,
I wouldn't have no luck at all

Yeah, my bad luck boy
Been havin' bad luck all of my days, yeah

So, what did the individual interpreters do with this song that made it such an icon. Albert King had a pretty workmanlike approach, but he drove the song, to a point where it feels like he's pushing it ahead of himself. It has the typical Chicago-style horn line-up and even some back-up singers, but you feel as if they're trying hard to keep up with King. King puts a lot into his voice; you believe him when he sings that bad luck follows him everywhere. And of course there's the inimitable Albert King guitar style, played on his signature Flying V. Here he is in 1980 in Sweden:

The Paul Butterfield Blues Band is a different story. Butterfield slows it down some and makes it even bluesier, if that's possible. Elvin Bishop's guitar is less flashy than it is impulsive here, and like Albert King he seems to be pushing the band along. Butterfield's expressive voice fits this song well, and the horn section seems so much more lush than King's. This is a classic track, but there was nothing on YouTube with it, so here's the original album track from The Resurrection of Pigboy Crabshaw:

Cream's treatment of "Born Under a Bad Sign" was how many in my generation first heard the song. They slow it down much more than Butterfield did, and under Jack Bruce's voice and Eric Clapton's guitar this song becomes almost menacing, even spooky. Their treatment makes this sound as if the subject of the song isn't just a guy who can't get any breaks, he's a downright harbinger of doom. Here's Cream at their induction into the Rock & Roll Hall of Fame:

Finally, there's the Jimi Hendrix version. He never released this on an album, although he played it at the two live gigs with the Band of Gypsies. This is an instrumental, and like the Cream version it's slow, menacing, and spooky; Hendrix was good at setting that kind of mood. On this tune Jimi's more into creating that mood than playing guitar gymnastics. As I said, it was never released on an album in Jimi's lifetime; this YouTube video uses the track from the 1994 CD Blues, a compilation of Jimi playing Blues covers.

So there you have it - one of the iconic tunes of the Blues and the four performers who made it the icon it became.
Posted by Roy at 10:44 AM