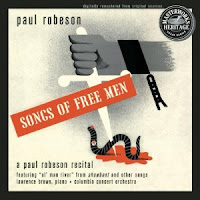 PERFORMED BY Paul Robeson, William Warfield, The Temptations, many others

NOTE "Old Man River" was a standard part of Robeson's repertoire and appears on many of his albums. It also became William Warfield's signature song.


But it was 1927, and the inadvertent racist tone of Hammerstein's original lyrics worked at cross purposes to the theme of oppression; the lyrics were recast through the years to eliminate Hammerstein's minstrelsy conception of southern black dialect. The opening line, for example, morphed from "Niggers all work" to "Darkies all work" to "Colored folk all work" to "Here we all work." Singer Paul Robeson, a genuinely protean character and one of the most fascinating figures of his age, took the lead in rewriting the lyrics, refining them so that the faux dialect did not detract from the considerable power of the melody or the meaning of theme.

"Old Man River" has an almost Marxist sensibility: An anonymous ("...them that plants 'em is soon forgotten...") black workingman oppressed by the inscrutable and relentless force of racism is stuck in a backbreaking dead-end job. He lives only for getting drunk on the weekend and because he fears the alternative of death. His days are robotic, mindless, and never ending: "Don't look up and don't look down...tote that barge, lift that bale." In the end, there is simply weariness and endless effort, while the uncaring "Old Man River just keeps rolling along."

Old Man River, that Old Man River
He must know somethin', but he don't say nothin'
He keeps on rollin', he just keeps rollin' along

He don't plant taters, he don't plant cotton
And them that plants 'em is soon forgotten
But Old Man River, he just keeps rollin' along

You and me, we sweat and strain
Bodies all achin' and wracked with pain
Tote that barge, lift that bale
You get a little drunk and you lands in jail

I gets weary and sick of tryin'
I'm tired of livin' and scared of dyin'
But Old Man River, he just keeps rollin' along

Paul Robeson sang "Old Man River" in the 1936 film of Show Boat. The first two verses are moved after the chorus. The montage in the middle of the production emphasizes the theme of racism, including an unforgettable and prophetic shot of an agonized Robeson behind the bars of an overcrowded jail cell:


The Temptations, with the initial verses intact. However, "white" has been changed to "rich":


Kenneth Anderson, sings first the first three verses as written, with the "Here we all work" introduction: