Dusty Springfield: I Just Don't Know What To Do With Myself 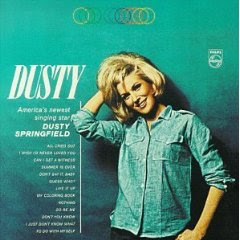 SONG I Just Don't Know What To Do With Myself

NOTE "I Just Don't Know What To Do With Myself" is an essential Dusty Springfield song. Any anthology without it is incomplete.

The greatest white soul singer bar none was an Irish Catholic lass born in West Hampstead, England with the unlikely name of Mary Isabel Catherine Bernadette O'Brien. Nicknamed "Dusty" as a child because of her tomboy ways, Mary changed her last name to Springfield in 1960 when she helped form a trio that wanted to call itself The Springfields. (No member of the trio was actually named Springfield, but they must have thought it sounded good.) In 1962, The Springfields decamped from England to Nashville with the hope of making, of all things, an authentic American roots album.

The group disbanded a year later, but not before Springfield had begun to absorb the innovative and accessible African-American sounds that would hit the popular music of the 60s with as great an impact as the British Invasion and psychedelia:


Only when I first went to the States and heard black pop music that I discovered...that was the music I wanted to hear.

Springfield's voice reflected a wistfulness, a sense of personal tragedy and loss hanging over everything she sang. She often transformed pedestrian lyrics into something intimate and deeply personal, while at the same time conveying her feelings so that she very nearly melded souls with her listeners. She found all the sad places within people, connected with them, and said, "I understand." In her hands, languorous ballads opened up with each line as she peeled away emotional layers until nothing remained but the deepest private core.

"I Just Don't Know What To Do With Myself" is a polished but standard MOR Bacharach-David ballad about the aftermath of a breakup. Springfield's interpretation of it demonstrates her ability to find something real in each note of a song and then build on that to satisfying and true conclusion. She locates and expresses with deep empathy the pain and suffering of the discarded one who prefers loneliness and the dim hope of reconciliation to moving on. Somehow, we believe that the dislocation of not knowing what to do is worth continuing to be "still so crazy for you." In the end, she'd rather risk the humiliation of her lover witnessing her angst than give him up altogether.

Springfield's career faded with the 60s, although she recorded right up until her death in 1995. A tumultuous  and sad personal life included recurring battles with drug and alcohol addiction, self-cutting, and at least one instance of hospitalization for injuries from domestic violence. Diagnosed with breast cancer in 1994, she passed away the next year.

Like a summer rose
It needs the sun and rain
Oh, I need your sweet love
To balm all the pain

The White Stripes' cover of "Just" is more tribute to Dusty than reinterpretation of the song, as Jack White channels her angst through the sound and technology of his generation:


Cameron Diaz' off-key -- and I do mean off-key -- screech in My Best Friend's Wedding helped make her a star and introduced the song to a new generation (it starts at about a minute in):

Labels: Dusty Springfield, I Just Don't Know What To Do With Myself