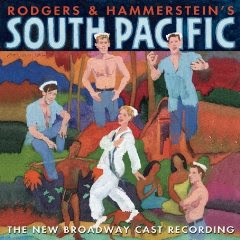 When South Pacific opened on Broadway in 1949, critics approvingly cited its call for racial acceptance. Although South Pacific wasn't the first musical to deal with miscegenation (that would be Showboat), its pre-Civil Rights movement sensibility must have seemed almost daring at the time. Today, the musical's racial plot elements seem mild and even safe, given that they took place in a locale far from the United States and did not concern relations between whites and blacks.

One contemporary writer has vehemently criticized the show's Orientalist subtext, although he gets so many facts wrong that his argument loses steam and becomes overwrought. While there is self-satisfied aspect to the book, a musical in 1949 was not an ideal venue to address a theme that most white Americans didn't know existed. If nothing else, South Pacific deserves credit for raising the subject, even if gingerly.

What few deny is the richness of the soundtrack of one of the first great post-War musicals. "A Cockeyed Optimist." "Bloody Mary." "There Is Nothing Like a Dame." "I'm Gonna Wash That Man Right Outa My Hair." "A Wonderful Guy." "Younger Than Springtime." "Happy Talk." "Honey Bun." "You've Got to Be Carefully Taught." "This Nearly Was Mine." One after another they come, a showstopper panoply of wit, farce, romance, and social commentary.

The greatest and most famous of all is, of course, "Some Enchanted Evening," the Broadway love-at-first sight song. Oscar Hammerstein reportedly wanted to write a song with the strong presence of an active voice, and he succeeded: "Evening's" verbs "see," "know," "hear," and "sing" emphasize the senses and as such give the song its powerful sensual appeal. Other images of romance and sensuality abound: A stranger emerges from a crowded room, laughter sings in dreams, and love is found in the mysterious, enchanted night.

It's not a passive love, either:

And what great love is passive? The night may beckon and the stranger may await, but you still have to cast aside caution and fly to her side. Only "fools give you reasons," but if you don't, you will pay the price and "dream all alone."

Who can explain it?
Who can tell you why?
Fools give you reasons
Wise men never try

A dashing Paulo Szot and a wholesome Kelli O'Hara headed the superb 2009 revival:


Opera basso Ezio Pinza's led the original cast and initiated the tradition of casting an opera singer in the role of Emile. Pinza's 1949 rendition became a hit and made him an unlikely national celebrity: